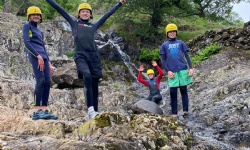 The Year 8 Leavers' went to Hartsop in the Lake District to spend five nights after their Common Entrance Exams. The group stayed in a bunkhouse type centre, and they were lucky to take part in a number of outdoor activities in the areas around Ullswater and Coniston.

The activities included gorge scrambling, hillwalking, tyrolean traverse, bouldering, abseiling, navigation and teamwork exercises. The two main activities were gorge scrambling and hillwalking and both led by Mr Hill and Mr Robinson, a hired-in instructor. Four gorges were tackled by the group  and they increased in difficulty and challenge as the week progressed. There was a steep and tough walk up to the Old Man o’ Coniston and a lower level walk around the centre at Hartsop. On arrival to the area, the group visited and walked around Aira Force.

The week was tiring but fulfilling for the Leavers’ and hopefully will have given them lasting memories of the area and the Leavers’ Programme. Some awards were given at the end as follows:

Most improved on the activities: Keira C

Most enthusiastic about the activities: Jack B

Pupil of the Venture: Connie H-A