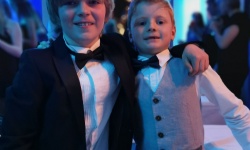 The children were welcomed into a magical and enchanting Ice Kingdom on Saturday night for our annual Winter Ball. The School had been transformed with the theme of the Northern Lights, created by the Ice Queen and her icy elves. The children arrived in their black tie attire and were greeted with a mocktail served on dry ice. There were many games and activities to take part in from a wishing tree, photo booth, roulette, card games, arm wrestling with a Yeti, tattoo parlour, wishing wheel and chill out zone. Pupils were invited in groups to a special photo shoot where their 'demons' (animals like in the Philip Pullman books) were then superimposed onto the photographs. The result is a stunning display of photos which portray the atmosphere of the evening and make for a wonderful keepsake for the children. Pupils crammed into the karaoke booth to sing their hearts out before being invited in to Dinner for a spectacular three course meal including a black forest mountain for pudding! Favours adorned the tables with treats for all including beautiful badges of various icy themes. Of course, the impending disco awaited and before long the children were dancing their hearts out on the dance floor to the tunes spun by our resident DJ's! The evening was spectacular and will make for many very special memories that the children will keep forever.